Locally owned and operated in Virginia Beach since 1974.

Welcome to the Neighborhood

Locally owned and operated in Virginia Beach since 1974, Built In Systems has maintained a tradition of excellence by treating each customer as a neighbor. Our founder, Jeffrey V. Simon, instilled this approach in everyone around him. Our belief is that taking good care of our neighbors will ensure the future of our company for generations. It is this mentality that helped us become one of the largest local security companies in Hampton Roads by the early 90’s.

Built In Systems actually began as D&J Service Company. It was intended to be a partnership between Jeffrey V. Simon and fellow Navy serviceman Deiter Cardwell. Since Dieter stepped aside before the business was completely formed, Jeffrey kept the name and said he would just call it “Dad & Jeff” referring to his young son, Jeffrey W. Since he was transitioning out of the military and faced with supporting his young family, Jeffrey took a position with the Virginia Beach Fire Department. During his 15-year career with the VBFD, he filled his off time growing a little “side business” to supplement his income. The focus has always been on providing innovative enhancements that make life safer, easier, and more enjoyable. In the early years the business was run out of the garage and offered cutting-edge solutions of the day such as pull-down attic accesses, TV antennas, and electronic garage door openers. With a background in electronics from the Navy and wanting to keep up with the times, Jeffrey eventually shifted his product offering. By the early 80’s D&J was known for three main products… central cleaning systems, intercom systems, and of course burglar and fire alarm systems.

The company enjoyed much success throughout the 80’s and early 90’s. We had a great team of very knowledgeable and friendly employees, strong relationships with local builders, and a reputation for offering quality service at a fair price. This winning formula grew the company to be one of the two largest of its kind in Tidewater. The profile of the company gained the attention of larger corporations at a time when owners were able to easily sell for an attractive return. Eventually Jeffery was made an offer he could not refuse and decided to sell D&J Service Company in 1995. Although the decision to sell the company was financially rewarding, he was disappointed to see his customers did not receive the same level of customer service from the new ownership.

At age 50 and fully retired, Jeffrey Simon opened a new company, Built In Systems. The company was put in place to take care of all the central cleaning and intercom customers that were displaced by the sale of D&J. This downsized version of D&J allowed Jeffrey to stay in touch with his long-time customer base and provide service without the stress and overhead he previously had. For the next decade he enjoyed staying in touch with his client/neighbors and grooming his son to take over operations. Sadly, Jeffrey passed away far too young at the age of 62 after a brave fight with Leukemia. Today his legacy lives on through Built In Systems where he is remembered as an exceptionally optimistic gentleman with a passion for family, friends, and his community.

His son, Jeffrey W. Simon, who had worked in the family business for years, embraced newer technology trends evolving for homes and businesses. His research and development focused on making Built In Systems a more complete provider of low voltage systems. By 2000 the new company was branded and offering a broader range of solutions to include security and life safety, structured wiring, audio distribution, central cleaning, intercommunication, surveillance and home theater systems. Since that time Built In System has grown into a solid resource for local families and businesses and their technology needs. 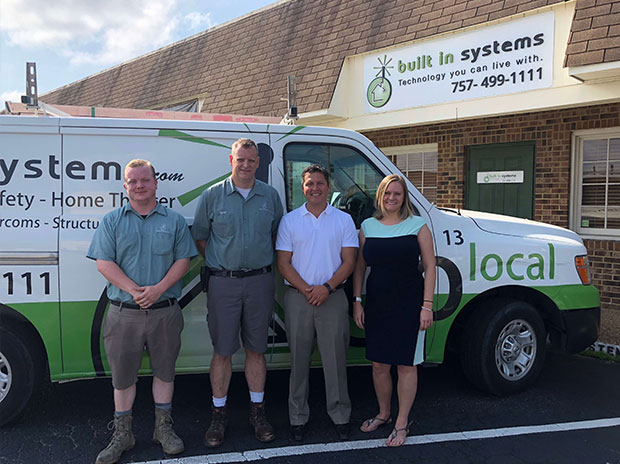